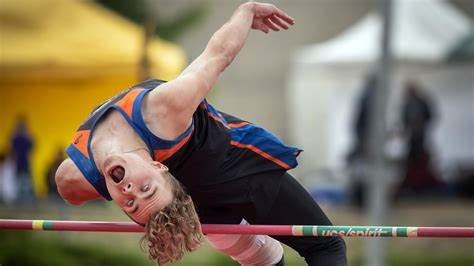 In the sprinting department we have Davari Grauer (LaCenter) leading the pack after throwing down an impressive 11.67 in the 100 meter & in the 200 meter putting up an impressive 24.12 look at he tries to repeat this season. For the Ladies Shaela Bradley (LaCenter) who as a freshman went back-to-back in the 100 & 200 meter.

For the Fellas Max Eline (Seton Catholic) took home the 400 meter, with much of the top competition graduating this senior looks to bring it home one more time.

Mr. Sweeney (King’s Way) lets us know ahead of Track Szn that he was taking home the 110 meter hurdles & 300 meter hurdles. He took home first in the 110 meter, however, was bested in the 300 meter by a senior and 2nd place Finisher Will Simmons (LaCenter). Look for the sparks to fly this year as they both return to throw down for the top of the podium.

For both the guy’s & gal’s this year will be a tight race for the relay teams as they were neck & neck and return with new faces to see who can put together the fastest team.

Shotput Karch Kipp (King’s Way) took 2nd place last season, and in the Discus, he took 9th place. But with many of the throwers that placed above him graduated he has a shot to jump up the leaderboard and maybe to the top. For the Javelin returning champ Zach Baker (LaCenter) looking to repeat his success from the previous year.

Grace Clinton (LaCenter) looks to take home the Shotput Gold! While Nalwanga Nsubuga (Seton Catholic) who took 3rd place behind two seniors will now be at the top for Discus. In the Javelin Gianna D’Emilio (LaCenter) took 7th place but with 3 seniors graduating and a year of experience under her belt she looks to shoot up to the top of the leaderboard.

High Jump Hannah Jo Hammerstrom (Seton Catholic) took 4th place but with one person ahead of her graduating she looks to secure a Top-3 Finish! In the Long Jump Sprinter Sensation Shaela Bradley (LaCenter) looks to also repeat as Champ after beating the competition by over a foot! Triple Jump Haley Bristowe looks to use last year’s success to jump three spots to the top! With the Pole Vault Virginia Carrion (Seton Catholic) looks to repeat and surpass her 6ft PR.

For the Guy’s High Jump Cooper Volkman (King’s Way) took 2nd last year but with the only person ahead of him graduated it looks like this will be his year as #1. Long Jump Davari Grauer (LaCenter) is primed to jump 3 spots due to graduates moving on and that will put him at 1st place for the year. Similar circumstances for Zachary Morrison (LaCenter) in the Triple Jump returns with the best jump, as well, Pole Vault Cayden Lauder (Seton Catholic) returns with the top height of 9ft and is set to take the top of the podium.

Stay tuned for a competitive track & field season in the 1A Trico from our Local Athletes!