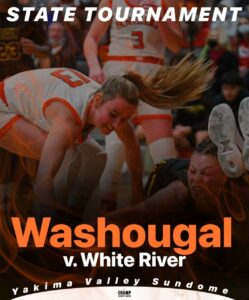 10:30am the day kicked off with Washougal vs. White River and The Lady panthers wasted no time jumping out to a large lead early on. Jaiden Bea leading the way with a double-double 15pts & 11 rebs. While Savea Mansfield & Samantha Mederos had double-digits in points (10 & 11 points), Savea snagged 5 steals on the defensive end. These lady Panthers limited White River on the other end and will be moving on to play TOMORROW against Burlington-Edis HS @10:30am. 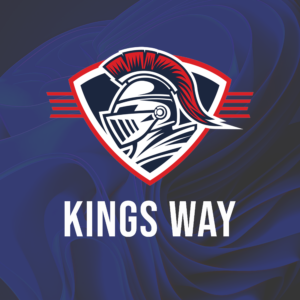 Next up were the Knights as they faced off with Freeman, the Knights were listed as the underdog according to seeds heading into this match. But Giovanny (Gio) Evanson didn’t see it that way and could not be limited on the offensive end. Gio scored 28 of the 41 points, adding 1 assist and 8 rebounds as well fighting to keep his team in the game. But more turnovers and a lower shooting percentage resulted in the Knights falling just short, in the final minute’s Freeman padded their lead a bit securing their victory. 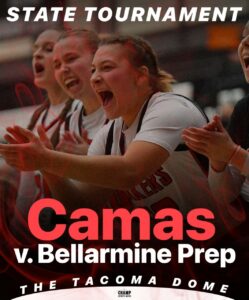 The Papermakers didn’t have Addison Harris and may not for the rest of the tournament, but that didn’t stop them from beating Bellarmine Prep. Camas had several players step up in a big way to fill the void of Harris being out, Reagan Jamison’s double-double with 19pts & 17rebs was a huge difference-maker. As well Kierra Thompson’s 15 points helped push the Papermaker’s offensive game past the Lions. The Mairs both contributed on both ends and in ways the stat-lines may not show, with each member of the team leveling up they were able to edge out the Lions by 6 points and advance to play TOMORROW against #2 Sumner @2pm. 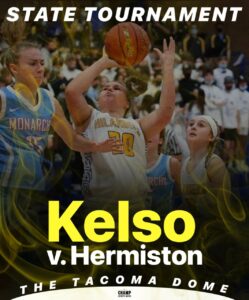 Kelso was without their walking bucket Natalie Fraley as she did not play in their matchup against the Bulldogs. Unfortunately, it would spell the end of the Highlanders season as Hermiston jumped out to a large lead. Kelso went into half-time down by 20 points, these ladies showed their resiliency and battled all second half. They narrowed the lead to single digits, but just ran out of steam in the final moments of the game. Evermore Kaiser tallied up a double-double with 14 points & 13 rebounds, but it just wasn’t enough to get past Hermiston despite the great effort to come back from down 20. 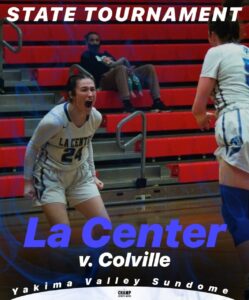 Kylee Stephens put up half…HALF of LaCenter’s points in this match, unfortunately that also meant the Wildcats were on the losing end. This was a back-and-forth game, struggling to get the ball in the basketball with LaCenter shooting 20% from the field and Colville shooting 34% on the night. The 2nd quarter proved to be the big difference maker of the game, Colville outscoring LaCenter by 10 points. LaCenter was the underdog in this match and the higher seeded Colville were able to secure the win over them.